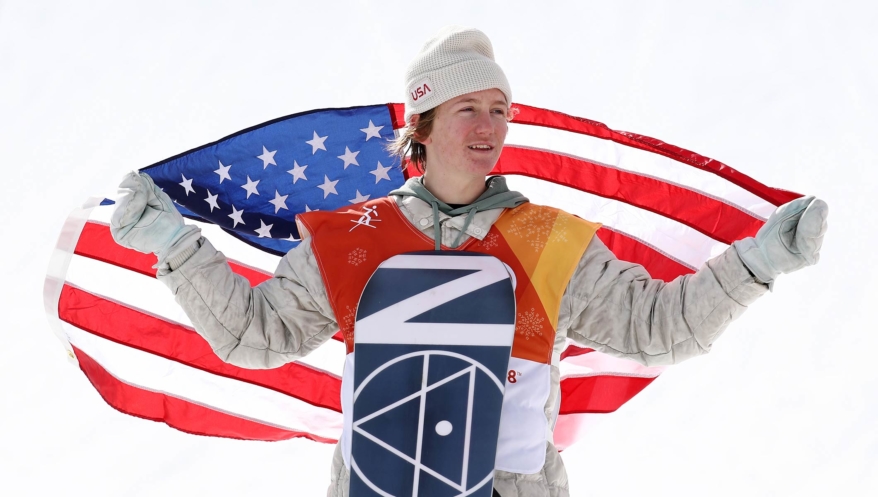 When we imagine an athlete’s path to Olympic gold, we think of thorough preparation, grueling training, and razor-sharp focus on the immense challenge that stands before them. For Red Gerard, the redheaded 17-year-old snowboarder from Ohio who won the men’s slopestyle gold medal in Pyeongchang on Saturday, that path involved staying up late the night before the event to watch Netflix, sleeping in the day of, and borrowing his buddy’s jacket as he rushed out the door to what he described as a “really relaxed” day of competition. If that’s not enough to make you want to fist-bump the guy, here are 5 reasons you should be rooting for him at his next competition on February 20th.

HE KNOWS HIS BINGE-WORTHY TELEVISION

Did we mention that Gerard stayed up late watching Netflix the night before becoming the youngest American man to win gold in the Winter Olympics since 1928? And he was watching Brooklyn Nine-Nine, a truly underrated gem of a sitcom. Seriously, if you haven’t seen it already, take note from young Red— it’s binge-worthy. To top it off, series co-creator Dan Goor told Yahoo that he “would love to do an episode where Jake Peralta and Mirai Nagasu chase an archvillain across a frozen-over parking lot, and just when he thinks he’s gotten away, Red Gerard and Charles Boyle snowboard out of nowhere and take him down.”

HE HAS HIS PRIORITIES STRAIGHT

The kid understands what’s important in life. Gerard slept in after all the Netflix watching and had to be woken up by his friend. And don’t think he stressed out about it: after borrowing a jacket because he couldn’t find his own, Gerard paused to enjoy a nice breakfast sandwich before heading out the door. Breakfast is the most important meal of the day: Gerard went on to score a combined 87.16 of 100 to top Canadian silver medalist Max Parrot.

HIS FAMILY HAS THEIR PRIORITIES STRAIGHT

The only thing better than Redmond Gerard may be Redmond Gerard’s family members, 18 of whom showed up to Pyeongchang to support him. They sent him a Snapchat while he was on the bus to the slopes of them shotgunning beers in his honor. And this was at 8:30 in the morning. The definition of the American Dream. The Gerards have got to be the most relatable family at the Olympics.

Gerard took to the podium Saturday in patterned socks with no shoes and proceeded to fist-bump the bronze medalist. Before that, he said “Holy f***” on live TV while celebrating his historic win, a slip that went miraculously uncensored in NBC’s delayed live broadcast, and no doubt led to some aghast expressions on older television viewer’s faces. The guy is a living model of what’s special about teenage joy, and he’s leaving older people (like horror author Stephen King) utterly confused.

HE IS SPECTACULARLY UNAWARE OF THE MAGNITUDE OF HIS ACHIEVEMENTS

Winning athletes’ speeches at the Olympics are full of overtures to the importance of their achievements. But when Gerard was asked at a press conference what he would do with his gold medal, he said that he grew up watching Dew Tour and X Games more than the Olympics, but that he would “probably stare at [the medal] for quite some time.” Asked if there was anything he’d like to communicate to his family, he gave a casual “Yoohoo! We did it.” Gerard has yet to finish high school, but he could teach us all a thing or two about taking wins in stride.